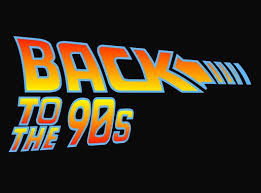 I’d like to think that I don’t have many regrets in my life (thus far). I’m not one to wonder “What could have been…” – – Most of the time, this lifestyle leaves me with a bruised ego but hilarious stories. I’ll save those for another time…

Anyway, it seems like everyone is always talking about how amazing the 90s were. First of all, it doesn’t seem to me that the 90s were that long ago… Really, already? The 90s are a “decade to remember”? Geeesh. Secondly, I was thinking about the 90s earlier today and it made me a bit regretful of all the things I haven’t done or achieved yet…

Let me try to explain…

I never banded together with a group of babies (Rugrats)

It turns out my childhood was quite boring. I never tried to escape a Pack-n-Play with a screwdriver kept in my diaper. Truth is, I had about ¼ of the imagination these babies on this show had. I was always so jealous of Angelica’s motorized play car. I literally had dreams about this car as a child.

Just look at that car.

I also never even idolized a gigantic green Tyrannosaurus Rex, named Reptar. (Well, I guess there was my connection to Barney…)

The only place a school bus took me was from home and to school. On the off chance, we perhaps hit up a museum. All I wanted was for Ms. Frizzle to wrangle up my class and take us to, oh I don’t know, the solar system, or the past, or even inside the human body of one of my classmates.

I was never a member of “The Midnight Society” (Are You Afraid Of The Dark?)

I think that every young girl and boy at some point in their life find themselves at a sleepover. At said sleepover, someone always suggests ghost stories… and they always suck. I think the main reason that these “ghost stories” are so terrible is because we grew up being scared shitless watching Are You Afraid Of The Dark.

I mean, c’mon. I’m pretty sure each episode was regarding a clown, or a creepy attic, or something that lived in a mirror, or some urban legend that would definitely not allow me to sleep for the next week.While I am not sad that I managed to escape ghosts, goblins, haunted houses, curses, vampires, and aliens, I will always regret that I never sat fireside and said the legendary lines, “Submitted for the approval of the Midnight Society, I call this story…” Then at which point, I would toss a handful of “midnight dust” from a secret, leathery pouch into the campfire to enrage the flames.

I never solved any crimes. (Ghostwriter)

I’ll always be regretful that I was never on a team of young detectives from Brooklyn who solved neighborhood crimes and mysteries – – With the help of an invisible ghost, of course. It took my six-year-old self about two seasons to realize that this show was designed to teach reading and writing skills… and then I was like SEE-YA.

I was never a teenage witch. (Sabrina The Teenage Witch)

This one is pretty self-explanatory. I never had magical powers.

Or a magical talking cat.

I never dated Zack Morris (Saved By The Bell)

I really should have been more promiscuous at a younger age. I feel like I saved it all for my twenties and really wasted some solid years. I’m not sure how I would have gotten this whole “ladder that is to transport gentleman suitors to my bedroom” past my parents… But I really should have tried.

At least Dawson’s Creek takes note of the ladder – – When Dawson and Joey become… “closer” the ladder is taken down. However, Clarissa never “explains it all” – – Her ladder is never discussed and what’s-his-face ventures up to her room numerous times.

How I never went to high school in Texas. (Varsity Blues)

Okay, the title of this one is a little misleading but I couldn’t find a better way to phrase the two regrets I have gathered from this film.

First, it’s really a shame that I never was a second string quarterback who had to jump into the starting line up and take over the for the star when they were terribly injured. I’ll never get to feel the pressure of an entire town to win a football game. Side note: This movie gave me one of my favorite lines, “I don’t want your life!” (Said with a slow, southern drawl).

The second regret from this is that I never sported a whip cream bikini for a guy.

I guess there’s still time for this one.

How can anyone who went to high school not hold She’s All That as their guilty pleasure? It holds all the cards: Hottie McHottie Freddie Prinze Jr in his prime, an ugly duckling/swan transformation, and a “not” choreographed dance by half the student body at the prom.

Also, I love this “makeover”. Because, clearly, Rachael Leigh Cook was so hideous to begin with. They literally cut her hair, pulled down her shirt, and gave her contacts – –  Boom! Prom Queen.

This one I really, really want. I hope that someday I’ll have an all-wise mentor, dolling out advice, and who will seemingly know what I should do in all situations. Also, many people are bothered that Wilson never showed his face during the series, but I appreciate it. There has to be some separation between neighbor and neighbor.

Mind you, this is coming from a person who routinely would engage in year-long feuds with “neighbors” in her apartment buildings over laundry or parking issues.

How I was never a lifeguard (Baywatch)

I remember watching this show with my mom, never really understanding what any of the episodes were about. All I could muster was that there were beautiful men and women running around on the beach and sometimes they saved people. They lived by the beach, hung out at the beach, worked at the beach – – Sign me up.

After thinking about all the “regrets” and thoughts that I had about 90s TV/movies, I came upon a few shows that have actually depicted a pretty accurate version of my life.

This show is everything. And yes, I’m pretty pumped about the revival, Girl Meets World coming soon. This show not only helped me through my youth, but serves as a walk down memory lane when I catch it on syndication here and there.

Boy Meets World also serves as a mirror in some ways to my life. As cliché as it sounds, the friends I grew up with are the friends I went to college with. We remained friends and I see our friendships lasting for a long, long time. We even have our “Cory and Topanga” who started dating when they were 15 and were just married this past October. Our group has the rebel, “Shawn”. The goofy, lovable one, “Eric”. Now, this makes me think… Who am I in this scenario?

Aside from living in together in close quarters and their intertwining love lives, I think that these two shows also share a very important factor that is resonant in my life: Growing up.

You may think that all these other sitcoms and series that I listed helped me in growing up, however, I don’t think so. Those shows were there for the beginning, but I think I’ve done the most “growing up” in the last few years than I have my entire life. I also think that the people you surround yourself with and the friends that you have in your twenties really help shape the person you are becoming – – The person you’re meant to be.